The rush of battle is often potent and lethal addiction, for war is a drug

After being subjected to hi-fi cinemas like AVATAR, Terminator series, I happen to hear a lot about this movie The Hurt Locker. After a lot of speculation about this (Six Oscars!!), I settled down in front of my computer, to watch it.

I can hear lots of squishy whispers about seeing the movie in my System. But this movie is not a newbie to get released outside India. This movie was first released on September 4 2008 in the Venice film Festival and the second release on June 2 2009 in USA. So I’m doing the legal action of watching it in my computer!! 🙂

Anyways, the movie is all about War, not containing the war scenes as that of 300 or that of Gladiator. But it is all about the life of militants belonging to bomb diffusing squad, during the early stages of post invaded Iraq, somewhere around in 2004. The movie kick starts with the Staff Sergeant Thompson who gets killed by a remote detonated Improvised Explosive Device also known as IED. Later, Sergeant First Class, William James, who joins as a team leader in the US Army Explosive Ordinance Disposal (EOD) Team, replaces Thompson.

The main responsibility of James is to lead the bomb diffusion team to the location and to examine the IEDs in person, well clad in the bomb suit. James joins with other two Sergeant J.T. Sanborn and Specialist Owen Eldridge who primarily communicate with James through the radio embedded in the suit and to provide him cover from external attacks.

James is a well trained, battle tested veteran who consistently and exceptionally disarms IEDs from inside his suit. His reckless ways of approaching the affected, suspected scene of bomb implantation and disarming it were considered to be crazy and hasty. Though James exhibits brilliant expertise in diffusing any kind of bombs, his hasty behavior makes them annoyed and they go to the extent of killing James.

They undergo many missions in the Iraq where bombs have been embedded in cars, and in grounds where civilians were targeted to be killed. Their timely mission to the location saves people from death bed. James is nevertheless a hasty bomb diffuser, who locates a huge bunch of IEDs in the back of the car. On locating it, he removes his bomb suit and completely disengages himself from it. He examines the circuitry in close proximity to the bombs and exhibits brilliant craftsmanship sans any protection! Inspite of being able to face bombs with ease and bravado, he is mentally unstable and completely controlled by emotional ambiguity. This is well clearly seen when he unearths an unexploded IED surgically implanted inside the corpse of a young boy who he believed to be the one, who was selling DVDs in the streets of Iraq. He even fails to diffuse a bomb which is strapped in thin metal in the Iraqi civilian’s chest, due to the insufficient time clocked in the time bomb programmed with the IEDs in a digital watch. After a failed mission to save the Iraqi Civilian who claims that he has a family and children who depend on him, James feels low and emotionally attacked.

In many of the scenes, James approaches the IED lying in solitude in the road in an anticipation to diffuse it, unexposed to the technical background behind it, until he opens it up like that of an engineering student faces the semester exam question paper without knowing what questions he may have to encounter, and which ones to leave in ‘choice’ provided he knows the tactics to score a full 16 in the other one! The probability of the student getting a pass in the paper or a fail depends purely on the way he has handled the questions.

Well, after being subjected to self emotional torture, James leaves the US Army and he joins with his family – wife and his infant son. Living with his family gives him a mere feeling of living a civilian life – cleaning, taking care of house hold, getting food items from the shops and the life of a normal human being. One night he confesses with his infant son in his bed and he says that he has only one thing that he knows which he loves. The next scene shows him in another team of EOD ready to serve for another 365 days of contract in a Delta Company.

That brings the movie to an end!!

The movie fully gives the viewers a scene by scene life of bomb diffusers in the US Army. It portrays the streets of Iraq where civilians gaze at them from inside the grilled windows, from the terrace and from the corners of the street. The EOD team effortlessly does their job of unveiling the bombs which are implanted anywhere in the cars, roadside debris, stones and mud heaps.

The real scenario of a bomb diffusing squad is well captured and the scenes give the real-time problems and the dangers of being subjected to explosion and how it is the responsibility of the team to protect them from being kissed by death.

Though the movie seems to serve thrill and spectacularism, it miserably fails to feed it properly to the audience. It barely keeps the audience in the tip of the seat. 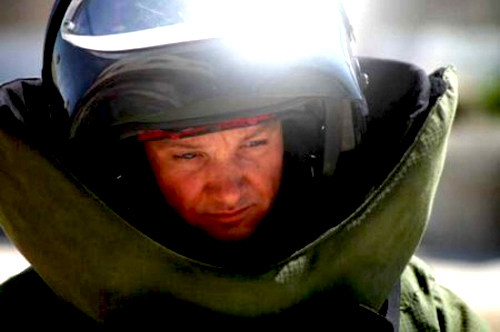 Is it worth the 6 Oscars?

But what really makes it a candidate for 6 Oscars is the question. The movie has neither visually enriching scenes like that of 300 or Gladiator nor graphics which captivates your heart and mind.

Hurt Locker has been awarded the following 6 Oscars in the 82 academy awards in 2010.

Does this sound crap? Do you think this movie deserves all this over AVATAR?

Okay I can accept this movie for best picture but I don’t think this the ‘THE’ Best picture in the Hollywood. There are others as well in the list. Since, it portrays the life of a soldier and what a war does to him; I can accept this to some extent that it brings in a reality in the movie.

So people think this movie is a best directed one? If I had heard ‘Yes’ from many of you, then I feel sorry for them. They miserable lack tastes. What about all other action flicks those lines up the Hollywood ladder? Are they not well directed?  Okay guys, direction is something that is really brilliant in all Hollywood series. But I do not know what this movie has in special?

As how in Tamil movies, a legal wife asks her husband about his secret affair lady, after being caught red handed in the bedroom

which translates in English to

The same question reverberates in my mind. What is that they found in this movie that other movies don’t have?

I feel extremely sorry to those guys who nominated this movie under these three categories. If all this sound mixing and editing is extremely brilliant that invited this movie under this category, then I request James Cameroon to release the “Making of Avatar” as a separate DVD in USA. Do people know that the screenplay that we saw in the theater (Yes I saw the movie in the theater!) is completely different from the performance that the actors were doing in front of the cameras? The actors literally have to act with the motion capture cameras, computers and mere nothings. The whole Pandora is nonexistent and still they acted in the place! That’s called brilliance and the technology usage.

Just give your thoughts on how much of sound mixing and editing the post production folks would have done, to bring out the pseudo actions and completely imaginative and nonexistent places (Pandora) and people (Navis) in real!

This really hurts the sentiment of many audiences that AVATAR was able to make up for only 3 Oscars. There can be internal politics behind this Oscars that failed miserably to identify the real performers.

Guess the Hollywood Film industry follows the suit of Indian IT companies which is affected with the disease of not being able to identify the real performers who put in genuine efforts in their daily tasks and awards are merely an eye wash in the name of valuing the employees for their work. Deserving candidates are missed badly due to many blocks that the superior face while identifying them for nomination.

The Hurt Locker –It hurts a lot!!