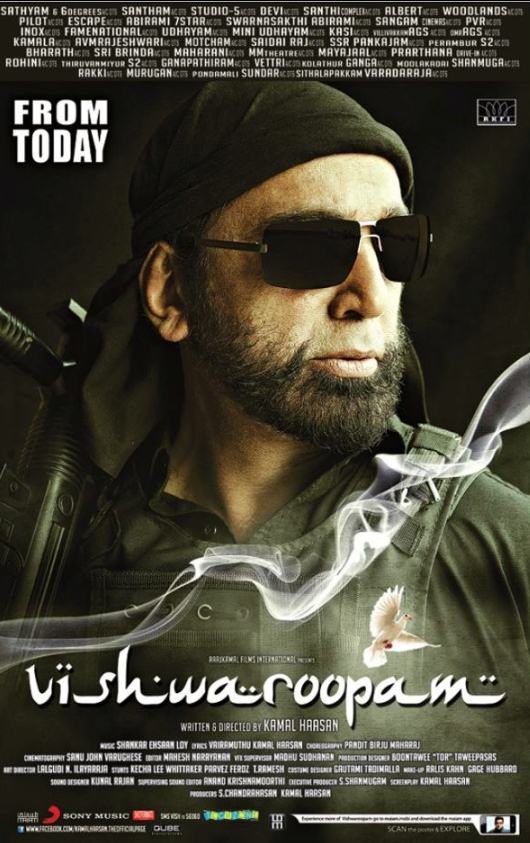 Well after so much hype, bans, media attention with press meets and political gimmicks which were meandering in the atmosphere, I finally got some opportunity to take a peaceful ride to watch this movie, just for the sake of personal gratification that seeks justification to such commotion that has been going on the industry and the state.

Vishwaroopam opens up with a conversation between a psychologist and Nirupama (Pooja Kumar) who is married to Vishwanathan (Kamal Hassan), a Tamil Brahmin, which is actually a marriage of convenience, to pursue her Ph.D. in Nuclear Oncology at USA, and not actually out of mutual love and acceptance. Kamal is a Kathak trainer with an effeminate demeanor, who speaks an awfully high accented tambrahm Tamil. Andrea Jeremiah and others span in to the movie as the scenes unfold slowly one by one. Set in USA and Afghanistan, revolving around a series of events leading to terrorism and nuclear war, the movie proceeds with an alternating timeline sequence than a linear fashion of story progression, which actually shifts back and forth at the right sequence. In a nutshell, it’s a story of an Indian spy who infiltrates into an insurgents group in Afghanistan (Taliban Insurgency?) and tries to deactivate their operations in USA. The movie on the whole gives a Hollywood sheath to a Kollywood movie.

I should say Kamal has taken a bold step to try out something quite different in the Tamil movie industry which he has been doing it consistently from the past – (like Anbe Sivam, Vettayadu Vilayadu, Dasavatharam etc). His movies stand out in the crowd and invite standing ovations. But what Vishwaroopam failed to do is – carve out a perfect encompassing and an engaging story line. The movie sprawls for two and a half hours like a college professor handling a course on Electronic Devices & Circuits (…aaah remembering my good old engineering days…!) and leaving out many topics, informing us that this will be dealt later in the forthcoming chapters, leaving the whole class in a state of factual acceptance of topics being handled without much grasping the real purpose of it.

Kamal has been a connoisseur in the industry when it comes to making movies with a different touch. He has been a pinnacle of performance and flamboyantly delivers a movie. His expression and body language in this movie as a kathak dancer never failed to make the audience gape in awe at his nonchalant display of skillful acting with a feminine touch. He always sets his ‘performance’ bar so high and always delivers more than what we expect out of him. His role as ‘Wisam Ahmad Kashmiri’, a Jihadi in Kashmir, who later becomes a trainer to the Al-Qaeda Jihadis takes us to a completely different view of the movie. The revelation that he is not a Hindu but actually a Muslim, at the start of the movie brings in umpteen questions in our mind which also makes us quite hooked to the story.

There are not many songs in this movie except the initial ‘Unnai Kaanathu Naan…’. Other song bits are being used as a back score to few scenes.

But Vishwaroopam’s expectation which was set much higher than his previous films, could never actually raise the bar to the fullest. It fairly tried to elevate, but faltered at some point due to its wavering and non-enclosed plot, trussing up few many knots at various parts of the movie, leaving it barely incomplete towards the end. The movie leaves you with a satisfaction that, it has come to some acceptable end somehow after hours of boisterous events unfolding with so many questions unanswered.

Talking about getting offended,

I know there has been a number of groups condemning, protesting, and rioting against portrayal of Muslims as terrorists and I too witnessed a number of scenes which juxtaposes the religion and their beliefs to terrorism. But also I understood that, there are other Muslims around them who are civilians who also get affected by the forces, the families and friends also lose their lives innocently in the air attacks from the US military troops who bombs insurgents’ sites. The sad state of suicide bombers and those young Jihadis who sacrifice their life to blow up a tank or a building with tied up detonators were portrayed so realistically – Too much of violence and bloodshed. I’ve seen it in many Hollywood movies but having it seen in Tamil makes me empathize more.

Tambrahms to my knowledge never accent their language so much. I know Tambrahms have a slang like shaaptela…shettha neram ukkarnthuttu poren…etc but Kamal went little over tongue and exaggerated everything to extremes. Also I’ve never seen a skimpy clad women delivering such an over accented Tambrahm non-sense – Thanks to Pooja Kumar. She may be living in US of A and can cheat on her husband or get into a marriage of convenience and also find comfortable in her drooping neckline costume so much that the audience may get a clear understanding of the relationship between the atomic number of cesium and her bosom. One more example of a blasphemy is the ‘Papathiamma nee saaptu sollu uppu kaaram poruma’ scene, which I felt was totally irrelevant to the movie. What significance did he ascertain with such scene with the story?

Pooja’s character wasn’t required at all. All she does was to agape every time when something was being told to her and open her eyes as wide as her mouth in her spaghetti night dress. Just for the mention of ‘Faraday Shield’ and radioactive property of Cesium with the need of reason to attribute it to oncology equipment, this character was wasted like ‘ay’ in ‘okay’. Ashmita Subramanian (Andrea) another Tambrahm couldn’t get a decent role than to nurse him when he gets wounded. She can still make a good career singing nice songs as playback singer and get some fan attention by appearing in Super Singer Junior, Senior, Super Senior , Fresher, Lateral and the likes! I don’t see any point on why to bring in Tambrahm connection to this movie? They can just be the agents speaking normal Tamil without bringing in belongingness to any particular caste, isn’t it? But on a contrary note, we ourselves take pride in mocking ourselves like Tambrahm Rage & Secret Iyengars and we enjoy our own idiosyncrasies! Why can’t a movie do it?

Well, as said above there are many reasons to get offended by other folks as well, but knowing that Kamal Hassan being an atheist himself has never given much inclination to any religious sentiments anytime. Everyone has their own sentiments, but to get offended by a movie is a waste of time is what I can say. Movies have always been stereotyping religions and people for a long time, not only Muslims, but also other religions have been portrayed in a bad taste. It’s just that few take it offensive and few groups don’t care, so the movies just get over with it. But the very fact remains same that, they have been looked upon with contempt.

Back in the movie, there are many voids that this movie didn’t patch up. Relationship between Pooja & Kamal has so many knots and past events which were not clear. How Andrea, Kamal & Shekar Kapoor formed a team wasn’t also much touched up. Also didn’t Pooja get a student VISA to pursue her Ph.D.? Why marry someone for convenience for a Ph.D.? Well, keeping logical questions apart, you can choose to enjoy the movie, if you don’t find those logical anomalies during your movie watch. Did I miss anything? Ohh yeah we have Osama Bin Laden in the movie!

Except that this movie gets a Hollywood-ish dress-up and the theme of the movie is much globalized, and brining in little scientific concepts like Radioactivity, Faraday Shield and Nitro Glycerine usage, Kamal gets a pat on his shoulder for bringing in new genre of movie to Tamil Industry.

As the movie doesn’t end with conclusion but dialogs denoting a new beginning and a quote to another sequel – Vishwaroopam II – coming soon to India, let’s expect a well edited sequel which may untie various knots and loopholes in the first movie, making Vishwaroopam a complete epic.

Vishwaroopam – Wish it was complete!